The USPTO has published examples of claims that it thinks would be eligible (or ineligible) for patent protection under 35 USC 101. The examples should be considered in view of 2014 Interim Guidance on Patent Subject Matter Eligibility and the U.S. Supreme Court’s decision relating to abstract ideas in Alice v. CLS Bank.

I thought Congress had finished this ... and when a nominee is apparently qualified why is the confirmation process so slow? Is anybody else mystified why Congress is grilling Ms. Lee on her views on fee shifting and other proposals for combating patents trolls? Perhaps she brought it up in talking about the White House Initiatives, but isn't Congress supposed to address patent reform and aren't the federal courts and PTAB adequate to deal with patent trolls? We need to reduce the longstanding examination backlog. Hiring more examiners has not produced that much. I also expect the "easy answer" of limiting the filing of requests for continued examination (RCEs) will only add to the huge appeal backlog.

As background, patent claims define a patent owner's right to exclude others. When parties dispute whether a claim is valid or infringed, a judge will interpret the words and phrases of the claim (i.e., claim construction) in a Markman hearing. Claim construction is a big event, because many patent cases settle after the Markman hearing.

In Markman v. Westview Instruments, the Supreme Court held that a "judge, from his training and discipline, is more likely to give a proper interpretation to such instruments than a jury." But claim construction is not purely a legal question. Claim construction has facts underpinning the meaning of the claim that are determined by jury such as determining the credibility of experts testifying at trial, on e.g., what's molecular weight? Markman walked around this problem stating such facts are "subsumed within the necessarily sophisticated analysis of the whole document." Afterward the Federal Circuit understood claim construction should be reviewed as a question of law without deference to the trial court's fact findings. But this led to uncertainty on the meaning of the patent claim until the Federal Circuit gave its opinion, which too often reversed the trial court.

It is an important decision, but I am not entirely sure it's not mostly for lawyers, since it may just produce: (1) greater certainty that a trial court's claim interpretation will "stick," (2) less work for those lawyers in Federal Circuit practice, and (3) a greater role for expert witnesses. Although academics and lawyers are talking up a storm about this case right now, Teva should not be surprising since it is consistent with the Supreme Court's string of decisions that again try to rein in the considerable clout of the Federal Circuit, which has developed a substantial body of patent law.

Zach Vorhies, CEO of Zackees, agreed I should post something about the Zackees turn signal gloves. Initially, I wanted my readers to know about a great product. But I soon realized much more is at stake. Let me explain it this way many of us know someone who was seriously injured in a biking accident that involved a car. Sometimes it's a careless driver or biker, but other times the driver may simply misread where the biker is headed and things happen fast. I see people riding bikes at all hours in the SF Bay Area and believing others share this problem want to share how to make biking safer.

Zackees turn signal gloves make biking safer, because drivers won't need to guess where the biker is headed. The gloves have super bright LEDs that form a clear turn signal drivers can readily see. Further, the gloves use a microprocessor controlled ambient light sensor to adjust to the LEDs to the outdoor lighting conditions while conserving a rechargeable battery. The on-off switch never requires the biker compromise his steering as the hands remain on the handlebars while turning the turn signal on and off. The gloves fit and work well according to my high schoolers and can be had for less than the price of dinner for two in SF where they are based. The founders Zach Vorhies, formerly a software engineer at Google, and Murat Ozkan, an electrical engineer from Toronto Canada are terrific engineers and have built a product that will help the world.

By the way Zackees made 200% of its funding goals on Kickstarter, has received rave reviews around the world, and has been featured in Huffington Post, Women's Health magazine, and the Wall Street Journal.

If you are interested in "being seen," see www.zackees.com and https://www.youtube.com/watch?v=iUZ89t1FctY. 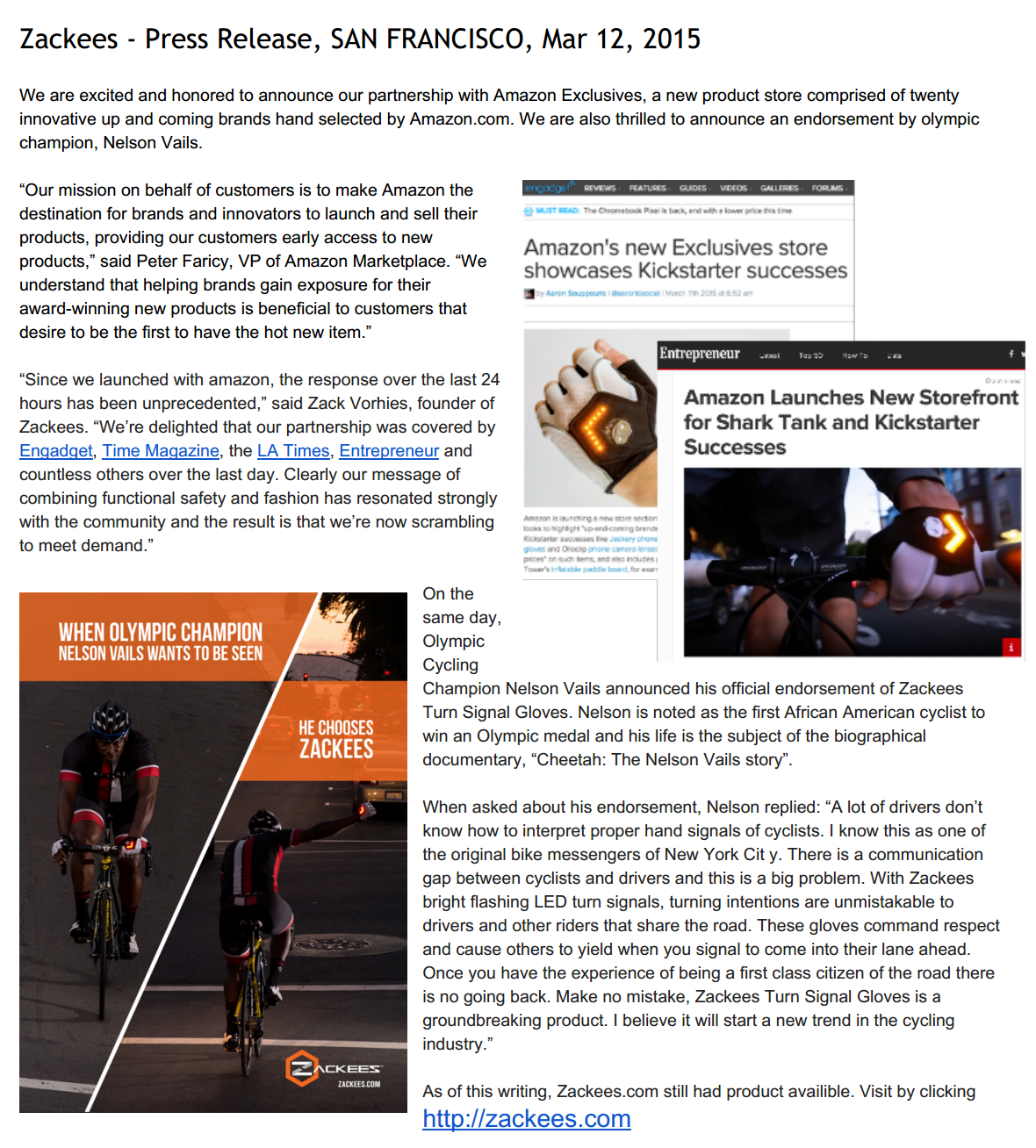 Labels: biking, Zackees Posted by Robert Moll at 12:39 AM

In Citing References at the PTO (2012), Professor Dennis Crouch tells "as part of the application process, patent applicants have a duty to identify prior art references that are material to patentability."

Despite all of this, we now have an article with findings that challenge the conventional wisdom of "gold-plating" patents by submitting lots of prior art. Professor Michael Risch's A Generation of Patent Litigation: Outcomes and Patent Quality(2015) is an interesting study, and in particular challenges the convention wisdom that citing more references at the PTO will result in a better US patent. See finding 3 in the Abstract below.

"This study compares twenty-five years of litigation and patents of the ten most litigious NPEs (as of 2009) with a random group of cases and patents in the same yearly proportions. All cases involving every patent was gathered, allowing the life cycle of each asserted patent to be studied. The data includes litigation data, patent data, reexaminations, and other relevant data. This paper considers outcomes and patent quality. A future paper will examine innovation and markets.

Unsurprisingly, the data shows that the studied NPE patents were found invalid and noninfringed about twice as often as the comparable nonNPEs. But there is more to the story. First, summary judgment challenges were denied at about the same rate. Second, most cases never tested the patent at all: the invalidations were bunched into 3% of the cases. Third, about 17% of the NPE cases involved a patent that was later invalidated, as compared to 3% for the nonNPEs. This left 75% of NPE cases with patents that were never tested and did not involve a patent invalidated at any time (as compared to 90% of nonNPE cases). Thus, one’s view of the data will depend on views about motivations in asserting patents that wind up invalid later and the merits of settlements. The paper presents data about settlements, consent judgments, defaults, and the like, but ultimately takes no position on the quality of untested patents.

Other major findings include:

2. A patent’s likelihood of being invalidated has almost nothing to do with objectively observable patent metrics – including reexamination data. Instead, the odds of invalidation are driven by those cases that are more likely to have a challenge, like the number of defendants or number of patents in the case. Once variables that indicate challenges are considered, a party's status as NPE added no explanatory power.

3. One patent metric was statistically significant in predicting invalidation: backward citations, or the number of prior patents that a patent refers to. But the sign was surprising: the more citations in the patent, the more likely it was found invalid. This may mean that backward citations are another selection variable – patents citing many other patents may be more likely to be highly controversial and thus challenged. This finding implies, however, that “gold plating” patents may not be as beneficial as first thought."

Thus, Professor Risch's findings suggest that the recent practice of citing massive amounts of  prior art during the prosecution of a patent application to make it less vulnerable to an invalidity challenge may have an opposite effect, that is, too much "gold plating" can sink a patent!

Tonight, I suggest following the changes on the USPTO's 2014 Interim Guidance on Subject Matter for the USPTO's evolving position on patent eligibility requirements of 35 USC 101.

In Petrella, the Supreme Court examined whether the defense of laches (unreasonable, prejudicial delay in commencing suit) may bar relief on a copyright infringement claim brought within 17 USC §507(b)'s three-year limit.  The Court held that laches cannot be invoked to preclude adjudication of a claim for damages brought within the three-years, but copyright owner's delay in bringing the suit may be relevant to  injunctive relief and in assessing profits of the infringer.

This case is important, because it may enhance (or detract from) defenses that can reduce or eliminate patent damages.

"The suit claims that Iovine and Dre (Andre Young) committed fraud in pirating the headphones away from Lee and Monster.

The article doesn't give a link to the complaint or mention a patent infringement claim. Could it be that Monster was so busy inventing this new category of $300+ headphones that it had no time to seek patent protection?

Although the paper appears to aim at which software patents pose the greater threat to businesses, it should have another utility to patent prosecutors. On pages 5-9, RPX presents reasons why a set of representative software claims constitute "a computer implemented invention" or "a covered business method." Initial assignments to art units can play a big role on what happens next. For example, the art units examining business methods are rejecting them under 35 USC 101 at much higher rates. The Supreme Court voted 6-3 business methods are not categorically excluded, but the reality is different art units have different interpretations of 35 USC 101. One can attempt to draft the claim so as to not fall within business methods, but sometimes the subject matter doesn't give much latitude. Thus, during prosecution what type of claim may be more important than the details of the claim.

Tonight, I suggest reading China aiming to triple patents by 2020.

China Central People's government says it wants to be a bigger player in tech so aims to triple the number of patents it files by 2020 as Beijing looks to boost the country's high-tech economy in areas, reduce the length of the review process, and boost IP protection to address foreign firms contentions that IP law in China sometimes favors local players.

Tonight, I recommend reading Richard H. Stern's article Alice v. CLS Bank: US Business Method and Software Patents Marching to Oblivion? Mr. Stern is a smart guy and has been writing on software patent eligibility for many years.

Zachary is a gifted storyteller, and his article about 3M's Richard Drew convinced me to buy his coauthored book Hipster Business Models: How to make a living in a modern world.

Here's the tail end of the article:

Today, the technologies he created in Pro-Fab Labs account for more than 20 percent of 3M’s sales. His Scotch Transparent Tape remains the crown jewel of 3M’s immense, multi-billion dollar product line, and can be found in nearly 90% of American homes.

But Drew’s legacy extends deeper than the manifestation of a physical product, says old co-worker Paul E. Hansen.The reward for persistence is internal,” he writes. "The person who is persistent and eventually succeeds is usually only recognized for accomplishing the feat; seldom does anyone appreciate all that went into making the success a reality."